Yesterday at school the children came dressed as witches and wizards and had to complete 3 challenges in order to graduate from Magic School.

If you would like to dress up at home for your learning today that would be great - send us a picture on Tapestry so we can see.

Each group followed instructions on how to measure out a different potion - trying to work out which one would turn the Head Witch back into a witch.  They used different coloured water, pretending it was different ingredients such as melted tiger fur, monkey bogeys, dragon's blood and snail slime.  They then measured out carefully using the same sized cup the different amounts: half a cup / a full cup / a nearly empty cup and a nearly full cup.  They then said a magic word as they mixed the ingredients together.  If they had made the right magic potion then their cauldron started to bubble.

What you can do - write a recipe for your own potion telling us how much of each different ingredient you would need measuring in cups.  Please write this down in your purple book.  If you are able to make your potion too that would be great - we would love to see pictures on Tapestry.

(Magic tip for parents - a secret small squirt of washing up liquid in the bottom of the mixing pot will make the potion bubble!)

You need to design your own dragon's eye that you would use to help you see into the future.  In your purple book or on plain paper can you draw and decorate a dragon eye.  Think about what colour the pupil would be / will you have scales / what shape will it be / will it have eye lashes.

If you have any playdough at home perhaps you could make a dragpn's eye - can you shape it and cut it, make marks in it.  Take a photo and add it to Tapestry.

The children worked in small groups to make a magic star move without touching it!  First, they came up with a class moving spell.  Just like in a 'Magical Muddle' the children thought of 3 action words with -ing on the end (running / jumping / bubbling / popping / singing).  They then practised saying the spell below with their action words in using actions to help:

You can make uo your own alliteration for the end, just change the 'L' for a different sound.

If you are able to do this trick at home we would love to see a video of it on Tapestry.  Record yourself saying your magic spell and then adding the magic potion.

(Magic tip for parents - it didn't work this quickly in school so you might need to leave it a while and return later: not all magic happens instantly!) 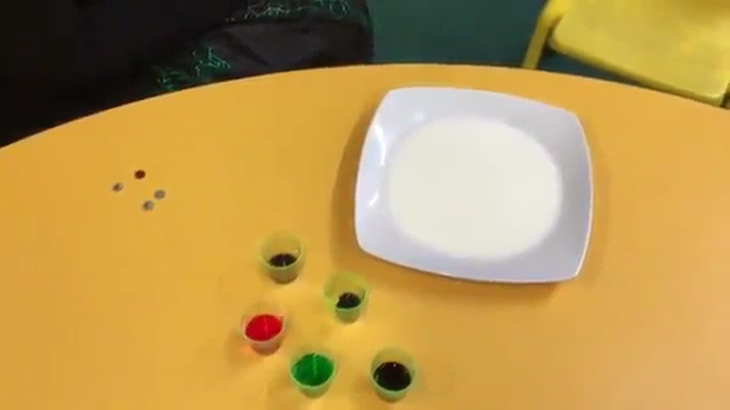 To end off Graduation Day Mrs Burkitt showed us a magic trick where she made colours move without even touching them!

Into a magic saucer she poured some milk, then she carefully added a few drops of Magic ingredients such as melted monkey fur, dragon's blood, tiger bogeys and snail slime! (food colouring). Watch what happens when a drop of dragon's slime (washing up liquid) is added to the magic saucer!
We hope all our trainee witches and wizards who are learning at home still enjoy their graduation day!  Please don't forget to show us pictures of your learning on Tapestry or via email.
Registered in England and Wales (as a Company Limited by Guarantee No. 7966182). Registered Office: Hampton Primary School Academy, CT6 8NB
Top

Unfortunately not the ones with chocolate chips.

Some cookies are necessary in order to make this website function correctly. These are set by default and whilst you can block or delete them by changing your browser settings, some functionality such as being able to log in to the website will not work if you do this. The necessary cookies set on this website are as follows:

Cookies that are not necessary to make the website work, but which enable additional functionality, can also be set. By default these cookies are disabled, but you can choose to enable them below: